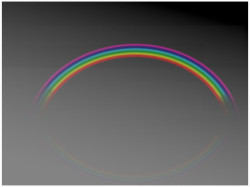 Noah did not forget about God, who generously had protected them; immediately after leaving the Ark, raised an altar instead and took of every clean animal and clean fowl, and offered them in holocaust on him1 to show his faith in Messiah, Christ, Christ’s Great Sacrifice, and his gratitude to God for his magnificent protection. The offering of Noah ascended to God like a sweet fragrance. He accepted it and blessed Noah and his family. This way a lesson was taught to every creature that would ever live: every time God’s mercy and love are shown to us, the first thing we should do is humbly thank and worship Him.

With the purpose of mankind not being scared when they saw clouds piling up and raining, and they were not constantly sorrowful with the fear of another flood, God kindly encouraged Noah’s family with a promise: “I establish My covenant with you; and all flesh shall never again be cut off by the water of the flood, neither shall there again be a flood to destroy the earth. God said, This is the sign of the covenant which I am making between Me and you and every living creature that is with you, for all successive generations; I set My bow in the cloud, and it shall be for a sign of a covenant between Me and the earth. It shall come about, when I bring a cloud over the earth, that the bow will be seen in the cloud, When the bow is in the cloud, then I will look upon it, to remember the everlasting covenant between God and every living creature of all flesh that is on the earth”.2

That bow had to show to every generation the fact that God destroyed the habitants of the earth with the flood because of their great meanness. So, when children of next generations saw that and asked why was that magnificent bow extended over the sky, their parents would tell them the destruction of the old world with a flood, was because of people had surrender to every type of impiety, and Highest’s hands had given its shape and put it in the sky as gesture of God who would not send again water of the flood over the earth. The rainbow is a symbol which belongs to God and it is in his throne itself.3 As God established a faith covenant with Abraham and his descendant4, He established a covenant with the whole humanity, believers and non-believers, that the world would never be destroyed by a flood once again.