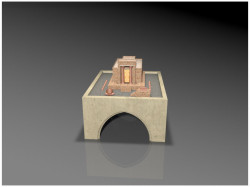 Ever since his reign started, one of David’s favorite plans was to erect a temple to Jehovah. Even though he had not been allowed to carry out this purpose, he always showed zeal and fervor for that idea.1 He had prepared a great quantity of the most expensive materials: gold, silver, onyx and colorful stones; marble and the finest wood.2 David decided where would the House of God be built: on the Mount Moriah, on the threshing floor of Ornan the Jebusite, bought by David to build an altar following God’s orders.3 When he was already old, he revealed to his son Solomon that God wanted him to be the one to finally build the temple. He told him about the preparations that he had made and handed him the plans and designs that God himself had gave to him.4 Solomon started working on the fourth year of his reign, in the second month and it took seven years to complete ir.5 “When the temple was built, they did all the stonecutting at the quarry. No hammers, axes, or any iron tools were heard in the temple during its construction”.6 The temple was completely covered inside, first with cedar wood and then with pure gold, which required a great quantity of the precious metal. However, not only had David prepared that, but the major contribution came from the people and their leaders, who willingly offered many things to glorify God7, besides what Solomon contributed later, as the work was going to be big and marvelous.8

Thousands of men worked on the different stages of the project.9 Salomon had two huge pillars built on the front side of the temple, the portico, and put one of them on the right and the other on the left. The one on the right was named Jachin; and the one on the left, Boaz.10 These names respectively mean “God will establish” and “By His strength”. It is interesting to see that this firmness and strength referring to God are also what He promises to his trustful and loyal children. In the Apocalypse, God makes a promise: “As for those who emerge victorious, I will make them pillars in the temple of my God, and they will never leave it. I will write on them the name of my God and the name of the city of my God, the New Jerusalem that comes down out of heaven from my God. I will also write on them my own new name”.11 During the service in the tabernacle, and the one in the temple that later took its place, .the great truths about death and Christ’s ministry were taught on a daily basis. Once a year, their thoughts were conducted to the final events of the great controversy between Christ and Satan, and towards the final purification of the universe that will wash all its and sinners.