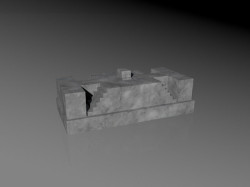 Since ancient times, instruments invented by man to measure time have been always used. Different varieties of water, air, sun, sand watches and other unknown kinds have been known. Calendar watches can be found in many ancient civilizations, including the Babylonian, the Greek, the Egyptian and the Roman one. The first sundials appeared on the year 3500 b. C. ago, in Egypt. There are many kinds of them. The Bible talks about a very special sundial, staircase-shaped, and there is two times on which the Bible talks about this object. It is the sundial of Ahaz1, called “dial of Ahaz” or “stairway of Ahaz”. In the Hebrew text, it is also called “the time of the stone”. The time was measured with the shadow, marking the “grades”. The word “grades” refers to the steps of the stair.2

In the midst of his prosperous reign, the king Hezekiah, king of Judah and son of Ahaz, was suddenly suffering from a fatal illness. He was “at the point of death” and there was not any human cure for his case. The last trace of hope seemed to be lost, when the prophet Isaiah came to him with a message: “This is what the Lord says: Put your house in order, because you are going to die; you will not recover”.3 Hezekiah wept very sore. Since David’s times, there had not been a king who had worked so powerfully for the building of the kingdom of God, in a time of apostasy and discouragement. The moribund king had faithfully served God, and had strengthened the confidence of Jehovah’s people as his supreme Leader. God heard the prayer of his servant4, and through Isaiah, he told him he would add fifteen years more to his life. The prophet ordered the king to put a lump of figs on the diseased part. As Moses and Gideon, the king Hezekiah begged to be given a signal that proved that message came from heaven. He was been given to choose between the fact that the shadow of the sun moved forward ten grades, or moved backwards ten grades. Hezekiah answered: “It is a light thing for the shadow to go down ten degrees: nay, but let the shadow return backward ten degrees”.5 The shadow of the stair could move backwards ten grades only by divine intervention; and so it happened when the prophet Isaiah clamored for God and the shadow moved backwards the grades it had gone down on the sundial of Ahaz, ten grades backwards.