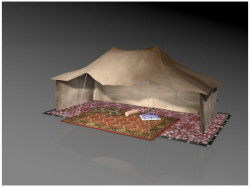 The figure of Abraham is one of the most iconic in the Bible. He is considered the father of both Hebrews,1 as all believers. Besides the Bible, history and archeology of the Ancient Near East provide important information for understanding more about the life of Abraham. Among the many stories and events of his life, the Bible also tells about the nomadic lifestyle of Abraham. Hebrews 11: 9 says about Abraham: “By faith he made his home in the promised land like a stranger in a foreign country; he lived in tents, as did Isaac and Jacob, who were heirs with him of the same promise”.

According to the Bible, God called Abraham, around 2000 BC, to leave the city of Ur of the Chaldeans located in Mesopotamia at the mouth of the Euphrates River, to go to the land of Canaan. Abraham was 75 when obeying the divine order,2 he left for the promised land; he, his family, their slaves, their belongings and their cattle. Once in Canaan, Abraham went to the mountain east of Bethel and pitched his tent there, and built an altar toJehovah.3 After a trip to Egypt, Abraham returned to his tent camp between Bethel and Hai.4 His nephew Lot, who accompanied him, also had cattle and tents.5 Later when he separated from his nephew, he pitched his tents and came and dwelt by the oaks of Mamre.6

Once was told about a visit by three heavenly messengers to Abraham’s tent. When these three people came, Abraham was sitting outside his tent.7 To take good care of his visitors, he went to the tent of his wife Sara, asking for her help.8 Around forty years later, after Sarah’s death, his son Isaac brought his wife Rebecca to his mother’s tent.9 All these details make us understand that, both Abraham and his descendants lived a nomadic or semi-nomadic life, living in tents and devoted primarily to livestock. But also, a life of faith and growing confidence in God, which was tested10 but triumphed and he was called “Friend of God”.11