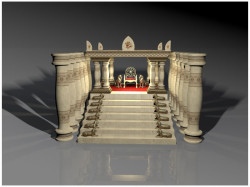 Solomon had succeeded his father David to the throne of Israel. God greatly honored him, and, as we know, Solomon became in later years the greatest, richest and wisest king that had ever sat upon an earthly throne, and what a throne! It was a great ivory throne1, coated with pure gold. It had six terraces, the podium was also of gold and the top of the throne was round by the backrest, with arms to each side of the seat, next to which were placed two lions. Also, twelve lions placed there on the six terraces, on each side. No other kingdom had done such a throne! Solomon had in abundance more than any other king2: gold, silver, precious stones, jewelry, hardwood, spices, animals, food, musical instruments, army, chariots, horses, weapons, ships, palaces, and the magnificent temple. The queen of Saba said that no one had counted even half of what she saw. His wisdom and his assets exceeded the fame that she had heard.3

The Lord appeared to Solomon in a dream, and said to him: “Ask what I shall give thee”.4 It was in this circumstance when Solomon expressed his feeling of helplessness like that of a child5 and requested the divine help. He asked for an understanding heart to judge the people that he may discern between good and bad. God was pleased that Solomon had asked this.6 God told him that because he had not asked for himself a long life, neither riches, nor the life of his enemies, but had asked for intelligence to judge, God did it according to his words and gave him a wise and understanding heart, so that there was none like him before him, neither after him shall any arise like unto him. But, in addition God will also give him all the things that he did not ask for. However, God placed as conditions that he would walked in God’s ways, keeping His statutes and His commandments, as his father David did, and for these, God would lengthen his life.

If Solomon had continued serving the Lord with humility, God would have confirmed his throne7 and his entire reign would have exercised a powerful influence for the good of the surrounding nations, which had received a favorable impression of the reign of David his father and the wise words and magnificent works carried out during the first years of his own reign. But after a very promising dawn, his life was left in darkness by the apostasy. History records the sad fact that the one that had been named Jedidiah, “Kind to Jehovah”8, the one that had been honored by God with manifestations of divine favor so remarkable that his wisdom and integrity gave him worldwide fame; the one that had induced others to worship the God of Israel, was diverted from the worship of the Lord to kneel down to the idols of the pagans, although toward the end of his days he repented of his evil ways.9