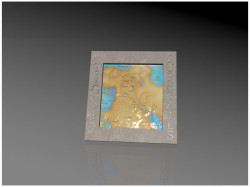 Water is life. Although this is true, in the region of Middle East makes more sense than ever. These rivers it up the lives of the Mesopotamian civilizations, and formed part of the Fertile Crescent (or FertileHalfMoon), which included Mesopotamia, Syria, Palestine and northern Egypt. Euphrates and Tigris currently run between the countries of Turkey, Syria and Iraq.

Tigris river, extending along 1900 km from its source in the Taurus Mountains. The Euphrates River runs along almost 2300 km, from the vicinity of Mount Ararat. Both rivers before emptying into the Persian Gulf, are joined in the Shatt Al-Arab River, whose length is about 200 km; formerly not yet joined and flowed directly into the sea

Tigris and Euphrates (eastern), have been essential in the Sumerian civilization, and on its shores and in its basin important citiessuch as Babylon, Mari, Nineveh, Nippur, Ur, Uruk and Eridu were established. Some of these cities were important in later empires: Assyrian, Babylonian and Persian. In the Bible, or Hiddekel Tigris River or Hiddekel, and Euphrates River were two of the four rivers in which the water stream that came from the Eden garden was divided.1 Also on the banks of Tigris River, the prophet Daniel receives a vision2; on its behalf, the Euphrates River has a greater biblical presence, as it is named 59 times in 17 books of the Old Testament and the Revelation.3