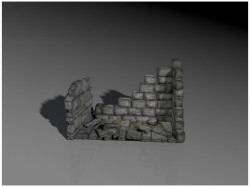 Near Jordan River, right in front of the Gilgal, the place where the Israelites had camped, there was the city of Jericho. It was a big, rich, very fortified city, with high and solid walls. Even so, its inhabitants feared Israelites, since they have heard about the power of their God when he liberated them from Egypt, during their way and in the miraculous cross of the Jordan River.1 Jericho was virtually the key of all the country of Canaan, and it represented a tremendous obstacle for Israel success. Joshua had sent before the two young spies to visit the city, and to find out something about its population, its resources and the solidity of its fortifications. The inhabitants of the city, terrified and suspicious, remained in constant alert and the messengers were in a great danger. They were, however, saved by Rahab, a woman from Jericho who risked her life for them. As reward for her goodness, they promised her to protect her when the city was conquered.2

Joshua, leader of the Israelites, sought in prayer a guarantee of the divine direction; and it was granted to him.3 God told him he had already given him the city, and that they did not need to fight to conquer it. They just had to do something strange and mysterious, which will prove the power of God and the total trust they could have in him. They just had to walk in silence and in order around the city4, carrying God’s ark and hooting the horns; one time each day during seven days. No other sound apart from the steps of the crowd, and the solemn sound of the trumpets, reverberating among the hills which resounding on the streets of Jericho, must not sound. Many inhabitants would make fun of it; others would be alarmed and frightened when they see the procession that each day surrounded the city.

During six days, the people of Israel went once around the city. The seventh day arrived, and at the first ray of sunlight, Joshua mobilized the army of the Lord. This time, he gave them the order of walking seven times around Jericho, and when they heard the mighty pealing of the trumpets, they had to shout loudly, because God had given them the city. When the seventh turn, the trumpets sounded with a mighty sound and the Israelites shouted very loudly.5 The solid walls fell to the land in ruins. The inhabitants of Jericho must be paralyzed because of the terror, and the armies of Israel entered in the city and took possession of it. The Israelites did not have won the victory by their own forces; the victory had been totally from the Lord. Only the faithful Rahab, as well as everyone from her house, was saved keeping the promise made by the spies.6 She lived since then with the Israelites. The entire city was burning down. The very place where the city was located was accursed7; in Jericho people shall never build walls as fortress; a threat of severe punishments fell on anyone who tried to restore the walls destroyed by divine power.