THE SANCTUARY AND ITS FURNITURE 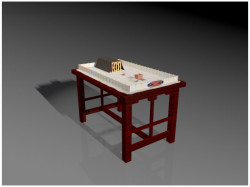 The sanctuary of Israel, its furniture, its sacrificial system, the priests and all its ritual were a lesson, a clear illustration of the Salvation plan that God had prepared. After escaping slavery in Egypt, the exodus led the people of Israel to the wilderness of Sin, at the bottom of Mount Sinai. There, apart from other things, God told Moses to make him a sanctuary.1 God gave them a pattern2, including the dimensions and the materials to be used.3 Years later, proceeding the same way, David received from God the pertinent indications to build a bigger sanctuary4, which was finally made by his son, Salomon5, and a third sanctuary was made after the return from exile in Babylonia.6 The furniture in all these sanctuaries is similar, although we can find some differences in number and position, and means the same. These three sanctuaries were a representation of the true sanctuary, the celestial one, made by God himself7 and showed as model.8 The worldly sanctuary, its furniture and the priestly ministry were figures that represented the celestial.9 The building, also called tabernacle, was divided in two sections:10 the holy place and the most holy.

1) In the first half of the sanctuary, the holy place, there were:

The table for the “bread of presence”11

The altar for burning incense13

2) In the second half, the most holy place, there were:

The Ark of the Covenant14, along with the cover15

There was another special object in the sanctuary: the censer of pure gold16, used by the high priest once a year, on the occasion of the day of reconciliation.17 The censer was like a small portable altar for incense, as it was made with the same elements and had the same aim, but in the most holy place, on the cover.

Outside the Sanctuary there was a courtyard, the dwelling’s courtyard18 that surrounded the tabernacle. There, there were two more pieces of furniture:

The altar of holocaust19

The sanctuary ministry consisted of two parts: a daily service and an annual one. The daily service ritual took place at the altar of holocaust, in the tabernacle’s courtyards, and in the holy place. However, the annual service ritual was related to the most holy place, where only the high priest entered once a year, on the day of reconciliation, even if part of this service took place in the courtyard and the holy place.

The daily service consisted of the morning holocaust and the evening one. Each time, a lamb was sacrificed21 that represented Christ and his death in our place. This action symbolized the whole nation’s daily consecration to God and their continuous dependence on Christ’s expiatory blood. In addition to that, every morning and every evening, incense was offered on the altar of god, and it ascended with the people’s prayers. It represents Christ’s merits and intercession, his perfect justice that does credit to his people through faith. Pies and grape juice were also offered. Besides these daily sacrifices, called the continuous holocaust, there also were some special sacrifices for each one’s personal sins. Each sinner had to carry his animal and kill it himself, after confessing his sins over it.22 Thus, the animal died in their place, representing Christ, our Substitute. The blood of the animal had to be collected and taken inside. Symbolically, sins entered like that to the Sanctuary.

In annual service, the day of the expiation, the High Priest entered the most holy place to clean the sanctuary and remove the sins.23 Only the High Priest could enter there, and only once a year. That day a billy goat was sacrificed as an offering by the people, and which represented Christ. Its blood was taken inside, until the very propitiatory. All of this represents the moment of the final judgment and purification of the people of God.24 Another billy goat, representing Satan, creator and instigator of the sin, was taken to the desert after having taken the clean sins of the sanctuary and being left on him.25 That means Satan will suffer the final punishment for his actions. In the final judgment, by virtue of the expiatory blood of Christ, the sins of everyone who had sincerely repented will be removed from the celestial books.26 Their names will remain in the book of life instead.27 The names of those who had not repented will be removed from there.28 In this way, the celestial sanctuary will be liberated or cleaned, of the records of the sin.29 Christ, as High Priest and minister of the celestial sanctuary, started his ministry of intercessor when he ascended into heaven. This was represented by the daily service. Since the time set by prophecies30, the second part of his ministry, was made up of his ministry of intercessor and the judgment, started.31 This special part was symbolized; therefore it was carried out on the annual service of the worldly sanctuary. When this work finishes, he will come back for the second time32 to pick up his sons to take them with him forever.33

The furniture of the Sanctuary:

It was small and was made of acacia wood covered by pure gold. It had a molding around it and a gold cornice. It also had four gold rings on the four corners where the legs were. In those rings, acacia wood sticks were put to carry the table. On the table was the bread of presence,34 twelve loaves of bread or pies prepared with “the finest flour”35, arranged them in two stacks, six in each one.36 On each stack there was a bowl with incense37, which was offered only to the Deity. The loaves of bread were changed every Saturday38, and were considered as a food offering.39 There were also plates and cups and spoons for the libation40, act carried out with unfermented wine, that is, must. Unfermented or with yeast it entered the sanctuary.41 The libated or spilled must represents Christ’s blood, without sin and shed for us. The table was like God’s throne and was north-facing. The bread without yeast, as well as manna, represents Christ, his life without sin and his ministry in our behalf. “I am the bread of life. Whoever comes to me will never go hungry”.42 The two identical stacks represent the Father and the Son, together in their plan of salvation and seated on his throne, where Christ seated at the right hand of the Father when he ascended.43 Christ, as a priest, is next to the Father.44 Christ is the only mediator between God and man.45

It was made of pure gold carved with hammer. Six arms came out of the central shaft, three arms on each side, all of them topped with goblets in an almond tree flower, apples and flowers shape. Everything was a single piece, carved with hammer, made of pure gold. “A talent of pure gold” was used to make the candlestick, and it was also made “according to the pattern” that Moses saw “on the mountain”.46 Only pure olive oil was used to light the candles of the candlestick. The goblets of the seven arms were crooked forwards, so that they could illuminate the table.47 The oil represents the Holy Spirit, illuminating the work of Christ as a mediator.

It was the place bound for burning the incense offered to God during mornings and evenings in the daily service of the Sanctuary. That’s why it was known as the incise altar or the gold altar, since it was the altar of perpetual intercession. It was made of acacia wood and it was barely half a meter long and about 90 cm high. It had four horns, one in each corner as part of it, all of them covered by gold. It had a gold cornice around and two gold rings below its cornice, on its two corners on both sides to put the sticks with which it was transported. The altar was placed exactly in front of the veil which separated the holy place from the most holy place. Aromatic incense48 was burned on it with the sacred fire. It also had rings and sticks. The sticks were also made of acacia wood, but in this case, they were covered by gold. The altar represents constant intercession of Christ in our behalf and his mercy offered for us. In the annual service, the day of the expiation, the horns49 were cleaned, as well as the holy places, symbolizing the judge and final work of Christ for his people.

The Ark of the Covenant was on the most holy place. It was made of acacia wood and covered by gold, inside and outside. It was like a trunk which measured a bit more than a meter long and a bit more than half a meter wide and high. In the Ark there was the testimony, the tables of stone with the Ten Commandments. There also was an urn with manna and Aaron’s rod.50 On the Ark there was a cover made of fine gold, called the propitiatory that had a gold cornice around. Two gold cherubs, carved with hammer, kept vigil over the two ends of the propitiatory with widespread wings.51 Over the propitiatory and the place where lied the law of God, the presence of God, the “shekinah” was manifested as if it was in a cloud. God revealed its will and gave instructions for Israel’s people52 from there. The law is the rule of conduct and also of the judge. The law states the death of the sinner, but by virtue of the expiation forgiveness was given to the sinner. Like this, Christ, our lawyer and high priest made his work in our redemption behalf, symbolized by the service of the sanctuary, both the daily one and the annual one. In this way, “love and faithfulness meet together; righteousness and peace kiss each other”.53

The altar of the holocaust:

In the atrium and near the entrance, there was the bronze altar of the holocaust, the altar which represented the constant expiation. In this altar all the sacrifices were carried out. Each day they had to be offered through fire to the Lord and over its horns, the expiatory blood was sprayed each day in the daily service. The altar is a symbol of the cross where Christ was sacrificed, “the Lamb of God, who takes away the sin of the world”.54

The bronze fountain was between the altar and the door of the tabernacle. In this fountain, priests had to wash their hands and feet each time they entered the sanctuary55, or when they approached the altar to offer a holocaust. It represents purification, sanctification and respect for sacred things.